According to the Associated Press, FDA confirmed that chickens sold in markets are positive for inorganic arsenic. Arsenic is a toxic, cancer-causing chemical which can be lethal in high doses. The problem, in fact, lies in the origin of the arsenic which is given to the chickens. Arsenic is intentionally mixed with chicken feed. More than 70% of the chicken raised for meet are given arsenic in order to cause faster growth on less feed and give the healthy color of chicken, turkey and hog meat, according to the IATP`s report in 2006.

The FDA admitted that, more than a half of the tested chicken had inorganic arsenic in their liver, which is the most harmful form of this cancer-causing chemical.

Because of this reason, Pfizer had to stop producing the arsenic-containing drug called Roxarsone, which was frequently added to chicken feed.

“The agency said it recently conducted a study of 100 broiler chickens that detected inorganic arsenic at higher levels in the livers of chickens treated with 3-Nitro compared with untreated chickens… Pfizer said sale of 3-Nitro would be stopped by early July in order to allow animal producers to transition to other treatments.” 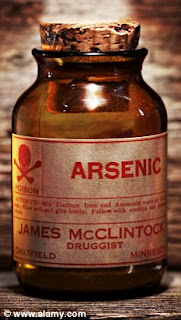 Even though this product was recalled from the stores throughout the US, the FDA declares that chicken is safe to eat because it does not contain high concentration of arsenic.

The production industry hides the fact that arsenic is extremely toxic and harmful chemical. According to the University Of South Carolina Department Of Environmental Health Services, arsenic together with mercury and lead has extremely damaging neurological effect on fetuses and children.

Experts claim that arsenic is 4 times more poisonous than mercury. The trivalent Arsenic As+3 is 60 times as toxic as the pentavalent As+5.

According to a study published in the Journal of the American Medical Association, people who consume large amounts of rice which contains arsenic, experience cellular changes which lead to cancer development.
Recent studies showed that arsenic causes Bowen disease, invasive squamous cell carcinoma, basal cell carcinoma on the skin, and cancers of internal organs such as kidneys, lungs, liver and bladder.

Beside all these facts, FDA continues with its claim that it is safe to eat food that contains arsenic, but it is dangerous to drink elderberry juice.