How to Play from the beginning: Ancient Era

Welcome again to CivWorld Tutorial Philippines! Now to talk about playing a game that starts from the beginning.

Sooner or later you will be receiving a Game Message telling you that you have unlocked an additional game slot. You now have 2 game slots, meaning you can now play 2 simultaneous games. The maximum is three game slots per player. 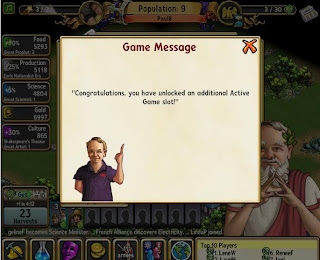 To play another game, click the "X" icon, then click on the "Throne" button at the main taskbar.

You will then be brought to your Throne Room (a location you can decorate and share with other players in Civilization World.). Click  on the "Your Games" button. 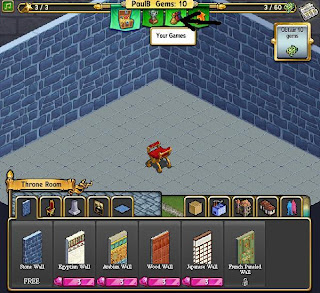 You will be brought to the Lobby Screen, which allows players to review or change the games they are playing in, could play in, or have played in. 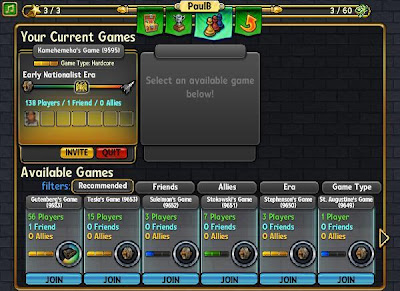 As you can see, you can join any available game you select at the bottom of the lobby screen. The very first Era will be the Ancient era, symbolized by a stone wheel icon. Some information about CivWorld's Era by CivWorld Wiki: "Civilization World is divided into Eras that measure the march of time as well as player progress and victory. There are twenty-one Eras in the game. Each Era is divided into an two halves: an early and a late period."

Click "JOIN" to play another game. I recommend the one starting in the Ancient Era, like Tesla's Game, Suleiman's Game, Stokov ski's Game, etc... Just make sure its an hardcore game and there are 10 or more people already on the game. This makes sure that the game have one or more player online at a time so that the game does not pause. The game pauses if there's no one playing.

Unfortunately, you will be playing the tutorial again after you join, but you can press the letter "Q" to quit the tutorial. By the way, here's a list of CivWorld Keyboard Shortcuts:

H - Add a house to a space in your city.
M - Move/recycle a building.
ESC - Cancel a selection.
R - Build a Road.
P - Build a Pasture.
G - Build a Garden.
C - Build Cornfield
O - Build Orchard
K+ENTER - Open the chat window.
CTRL+Click - Add a single unit to a battle slot.
Q - Quits the tutorial at the beginning of each game.

There, you are now playing CivWorld at the beginning, the Ancient Era. Thanks for reading! More on my next blogs. I am Paulo Baldemor, click on my name and add me up as your facebook friend. Come let us play CivWorld together!. Let's conquer the World, Socially, possibly with our Philippine Empire!
Previous Posts:
Labels: Games