Good day! Welcome again to Civworld Philippines! Today I will be reposting of a note made by the official Civilization World Page in Facebook about Combat or Battles:

One of the most exciting aspects of Civ World is war; from barbarian invasions to wars of sweeping campaigns of conquest. When your Civilization goes to war, you’ll need to be ready!

Combat is represented as a card game, with military units presented as stacks of troop types – cavalry, ranged, naval, and melee. But each battlefield only has a limited number of slots to accommodate a player’s units! A battle on the plains might have plenty of room for cavalry and ranged units, but a mountainous battlefield will be dominated by melee units and won’t have any room for naval units. You’ll probably want to build a good mix of different combat units in your civilization, so you can always bring the best force possible to the battlefield. 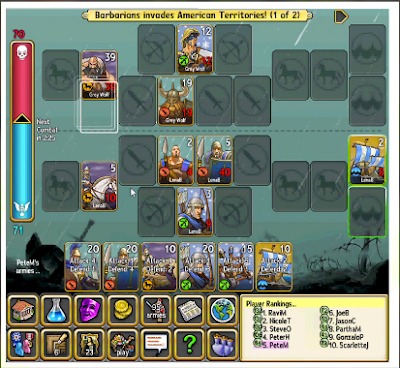 We represent a military unit in Civ World with one of the unit cards. The card’s portrait tells you what type of combat unit it is, and each type has a specific kind of weather it fights best in. When the weather favors your unit type, it does more damage, so once you put troops on the battlefield; you’ll want to pay attention to see if the weather changes to favor a different kind of unit. Unit cards of the same type can stack, so if you have twenty Spearmen cards, they’ll only take up one slot on the battlefield. By the same token, a single Swordsman card will also take up a slot! You’ll be able to see how many of those troops are in your stack, and a larger stack of cards will last longer than a smaller one.

Once you’ve committed forces to combat, you can set them to fight defensively or heroically. A unit fighting heroically dishes out more damage, but takes quite a bit more, so you will want to use this sparingly or your units may be destroyed before you can react! A defensive posture means a unit takes less damage, but it deals much less damage as well, which is useful if you’re just holding on until reinforcements can be brought into battle. 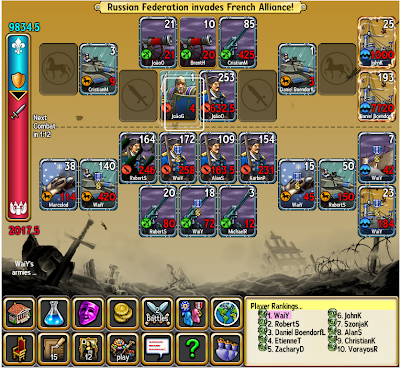 You’ll begin the game with a small number of military units, and as you research technologies you’ll discover new units that you can build. You don’t just have to build units, either – you can trade for units on the marketplace, so if you’re the kind of player who likes to focus on the economic parts of the game, then you can still contribute to defending your nation!

There you have it,  Combat, according to the Civilization World Page in Facebook. Thanks for reading this guide! I am Paulo Baldemor, click on my name and add me up as your facebook friend. Come let us play CivWorld together!. Let's conquer the World, Socially, possibly with our Philippine Empire!
Previous Posts:
Labels: Games