Hello and Welcome again to CivWorld Philippines! The following first 10 tips is a repost from KOTAKU (a video games-focused blog) entitled: 10 Tips for Achieving CivWorld Greatness, From the People Behind the Game. The additional 5 were from IGN.com. Here it goes:

Today, the makers of CivWorld are giving us tips. (Thank you!) We asked for them. We needed help. So, courtesy of the people at Civ studio Firaxis and their publisher at 2K Games, here's how to succeed in CivWorld. 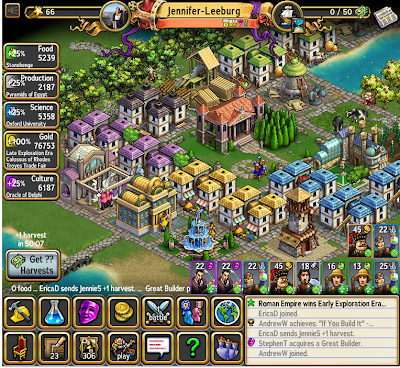 1. Have a Good City Layout

Make sure there is the shortest route possible from the citizen's house to the resource and then to the drop off location. This will ensure that the citizen is being the most efficient it can be. Another way to improve a citizen's efficiency is to make sure they are happy. You can do this by placing them next to neighbors of the same job, a forest, water or all three.

Utilize guard towers to scope out the map to find better water, forest, stone, and Iron resource locations. Also upgrade for higher visibility and usability of the map.

3. Upgrade Whenever You Can

To make your citizens even more efficient, you can place down productivity buildings. For example, a granary will be a new drop off location for a farmer and the more you upgrade it, the larger it will get making your farmer even more efficient. The same goes for a scientist next to a library or university or a merchant next to a market or bank. 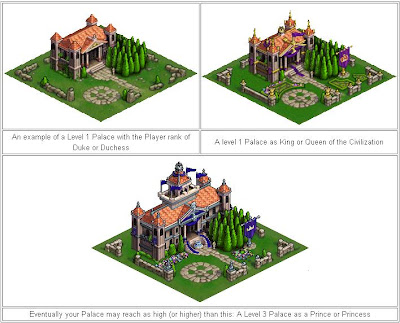 4. Get to Know Your Fellow Civ Mates

Use the chat room to speak directly to your civ to coordinate battles, technology research, Wonders building and any other strategies. Use the personal chat to work out treaties, agreements, and plan of attacks, with individuals in another civ.

5. Group Up on Technologies

Technologies are cooperatively discovered by a civ, from the pooled resources of all the members. The more members there are contributing their science to that tech, the faster they will collectively reach the goal and discover the technology. Coordinating a common research goal among your civ mates is the fastest way to discovery.

There are six ministers that you can become -- defense minister, cultural minister, finance minister, political minister, interior minister, and science minister. When you become a minister, you have more responsibility and be able to help your civ. In order to become a minister, you have to be the first in your civ to accomplish a specific task and win medal that will promote you to a ministry. For example, if you are the first person to upgrade your library to ginormous size, you will get a construction medal which will promote you to the interior minister. As the interior minister, whenever you harvest, you'll also give 1 Harvest bonus to a member of your civ. If you become the finance minster, when you complete the caravan maze, you'll send your civ some gold depending on how much you win.

As you collect achievements and medals, you will move up the ranks in your civ in hopes of becoming the king or queen. When a civ wins an era victory, Fame Points are distributed in descending order, so you want to be as high in the ranks as possible in order to get the most Fame Points. These points will then turn into gems so you can deck out your throne room and show off all of your achievements. The cool part about the throne room is what you place in the room is yours forever. So the more games you play, the more trophies you will win! 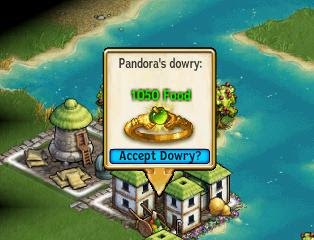 You can marry other citizens in the game using the "Dowry" button. The word "Dowry" will show up at random on the World button. What it means is you have the opportunity for one of the citizens from your city to "marry" a citizen from another player's city. The resulting dowry will give you and the other player a onetime bonus in the associated resource with the chosen Citizen. Neither player loses their citizen -- dowries are purely a bonus.

10. Stacking and Positioning Your Military

Stacking units or having a lot of the same unit also is important in a battle because it makes that particular slot on the battle field much stronger. During a battle, you should try to change the units' stance on every turn. Each unit can be changed to either "Fortify," "Heroic," "Normal," or "Retreat." While defending, you should change the units' stance to "Fortify" right before the turn is up to make sure your defense is at its highest. The same goes for "Heroic" when it is your turn to attack.

11. Diversify Your Plan of Victory

The difficulty of each Era victory increases as they are won throughout the game, which means the more times one type of victory condition is won, the harder it will be to win that condition again in subsequent Eras. For example: if a Civilization wins the Ancient Era with a Science Victory, the next Era could feature the same conditions for Culture, Economic, and Domination victories but have a harder Science condition. Then, if a Science Victory is won 'again', the Era after that could have an even harder Science condition. Therefore, the Civilization that diversifies and can switch its concentration Era to Era is often the strongest! 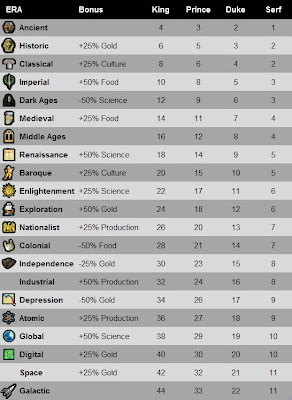 12. Take Advantage of the Different Eras

Most Eras have game-wide bonuses or penalties to the production of specific resources. The bonus/penalty for an Era applies to both halves of the Era -- Early and Late -- and until the Era is won, all players enjoy or suffer the Era's effects. An example of an Era bonus is during the Historic Era where everyone in the game gets a bonus of +25% to their Gold production. In order to take advantage of this bonus, increase the number of merchants producing Gold during this Era. Once the Era is over, change the citizens' job to take advantage of the next resource bonus.

When plotting to invade another Civilization, you should take a look at their battlefield beforehand since the defending Civ gets the home court advantage. Spying on a Civ allows you to see the number of military units they currently posses and a battlefield summary which enables you to strategize offensive and defensive positions, field terrain, and number of battle slots. You can spy on the another Civ's military units and battlefield by clicking on the "World" button on your taskbar, then click "Details" on one of the Civs. Once you are looking at the details of that particular Civ, click on the "Military Units" banner at the top of the screen and their military units and battlefield summary will be listed.

14. Win an Auction or Contest

Contests or Auctions are displayed in the Market screen and are special opportunities for players to win unique bonuses and prizes. They are available at random intervals and do not run simultaneously. For Auctions, players use the Gold from their Treasury to try to outbid everyone in the game for a particular prize. An example of an Auction item is the Ark of the Covenant which promotes the winner to King or Queen of their Civ. A Contest is different in that you are not using Gold to win something, but rather by doing an in-game action exceptionally well. Also, the prize for winning a Contest is Fame Points. An example of a Contest is "Most Bonus Resources Grabbed" which is achieved by grabbing the most bonus resources in a certain period of time (bonus resources are the pop-up resources that you mouseover above houses). So, pay close attention to the different Auctions and Contests going on the Market screen.

To quickly increase culture resources in the Great Art puzzle, you can activate the "Turbo Mode." There is a button on the bottom right of the Great Art puzzle screen that should say "x1" if you haven't activated "Turbo Mode." If you have a lot of swaps available, you can click this button so it turns on the "Turbo Mode". The button will display "x5" which means that for each successful swap you make, you use 5 swaps from your pool, but get five times as much culture. However, be careful when you're in this mode, as it will deduct five swaps for each incorrect swap made. So make sure you are confident in your swapping skills before activating "Turbo Mode." 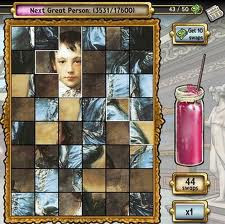